Dice is a tool that gives random options in the game by tossing. Although tools that can give random options also have forms such as turntables and draw cards, they are not as convenient to carry and use as dice.

Let's continue to learn more about the variants of dice. In fact, a two-sided die may not be a coin, as long as it faces the bottom when it lands, such as a card or a wooden board.

There are four flat bars in the Senitian chess that appeared in the New Kingdom of Egypt. They are used for throwing. One side is engraved with a pattern and the other is not. After throwing, the number of the textured side determines the shape. The number of moves.

There are also many approximate probability tools in China. For example, the ancient Chinese divination "Zhou Yi" used three two-sided dice for divination, but at that time it was performed with small pieces of wood.

In the ancient Chinese game "Liubo", there are also six crickets (that is, two-sided dice). The crickets are split in half by small bamboo tubes, filled with metal powder in the middle, and shaped like a crescent. To play chess. 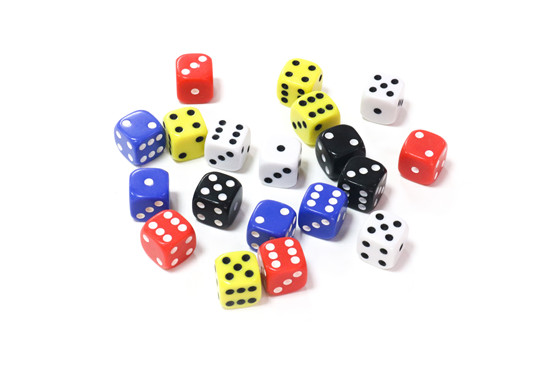 In contrast to two-sided dice, there is another type of dice with a diameter to height ratio of less than 1/2. This type of Dice is called a "cylindrical dice". Cylindrical dice are usually regular prisms, making their probability equal. The earliest cylindrical dice were actually knuckles on animals. The earliest Egyptians used it as a dice. This bone is relatively square. After throwing out, the four large areas will fall to the ground, which is like an approximate four. Prisms, but the probability of each facing up will be different.

The dice then spread to Greece and Rome, and the material of the dice also changed, using jointed dice made of earthenware, metal, jade, glass, crystal or ivory. During the Ptolemy period in Egypt, there were monkey-shaped joint dice.

In the Indus Valley in 3000 AD, standard quadrangular prism dice appeared in ancient Indian games. Each side was marked with a dot or a number to indicate the number, engraved with 1-3-4-6 or 1-2-5-6.

Later Rome also had hexagonal dice, and there were also quadrilateral dice in the Jermans and Scandinavians, and later octagonal dice appeared. The bottom surface of some dice will be made into a sphere or have a pointed top so that the bottom surface will not fall to the ground.

The regular hexahedron is also the earliest dice in the world. Two jade dice unearthed in the burnt city of Iran in 3000 BC were used as dice in double six chess. Later, after Alexander's conquest of Egypt, the icosahedral dice appeared. Other regular polyhedral dice do not appear until after the birth of Dungeon and Dragon. Most of them today are Plastic Dice.

The above are the types of dice, I hope to help everyone.

Previous: You Do not Have To Play Board Games

Next: How Is The Chess And Card Game Market Going In 2020?